Being off the grid, it’s not as simple as people think.  Just put your energy and your time into stuff that really matters to you. When I decided to start this project, this place was a jungle. I arrived here and saw this beautiful cliff on top of the mountain. I decided that I was going to build a house there, and that’s when the fun began. I asked myself how do I bring materials on top of this mountain? 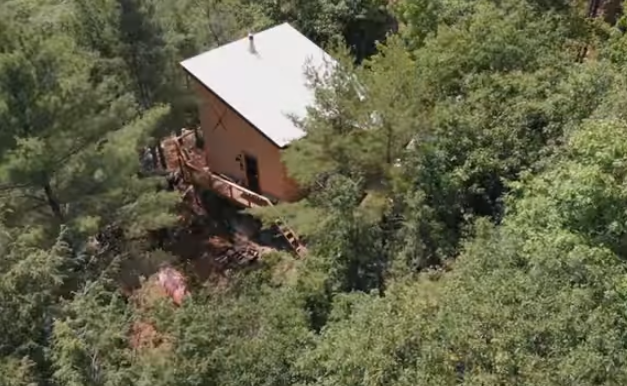 My friend thought of this material elevator idea which we built in 2 days. We started with the trail, then the material elevator and then cleaning the rocks, removing some trees that were in the middle of the place, but I wanted to keep it wild as possible.  I had help from friends with the structure.  It took 3 years because just bringing materials was very long. There is no road.  Everything is brought by 4-wheeler with a small trailer and you carry everything by hand.

The total cost of this place was $65,000 that includes the purchase of the land the solar system and everything else. I’ve been living here with my girlfriend for a year.  I think it’s the best thing that could have ever happened because living here sometime alone could be long. Also, it’s always better to share a place with the person that you love.

This pole barn cabin is 18’x22′, with a front wall which is 20′ tall and the back wall is 12′ tall. it’s not super big.  Because it’s made high, we have more space. There’s basically 2 lofts one loft is more like a living room and the other loft is my bed. The main level is cool.  It’s functional. The stove is in the middle as a result, the heat is well distributed. It’s efficient. You sit here, have a coffee and look at the fire.  There’s nothing better than this.

Kitchen is small but basically everything you need is in there. A simple van cooking top which is propane.  The propane that I can bring here (because we are in a remote area in the wilderness it’s the regular propane tank that you get for your barbecue. You can last 3 months with this so it’s basically $10 for 3 months. There’s no toilet inside because I don’t like a composting toilet inside. So, I have an outside toilet, but the bathroom is a real bathroom.  Just a bath. There’s a mechanical room where I have my treatment for the water system.

Also, my hot water heater and the place where I store my batteries for the solar. This house is solar powered.  I have 1300 watts, 4 big 550-amp hour deep-cycle batteries.  So, I’m running on a 12-volt system and my fridge is 110-volt fridge but I’m going to change for a 12 volt one because you can really save on electricity. Two things that take a lot of power is my satellite for internet and refrigerator. Those are basically the 2 things that you really need 110 volts. I have a backup system, which is a generator. So sometimes during winter or the months that are cloudy, the generator is started 1 hour during the morning or 1 hour at night and then you are fine.

Being off grid, it’s always surprises after surprise because every place is different and every place has its own challenges, its own environment. You can talk about stuff and people are going to have good ideas, but nobody has the right supreme formula of being off grid.  Everyone struggles at some point because you tried stuff that didn’t work so you try something else which works, there’s always a place for creativity and that’s the cool thing about being off grid.

The biggest challenge here is the water management. There’s no well because it is impossible to get a truck up here to dig a well. So, what I did is used what is all around me, the rain.  I have 3 tanks, 1,000 litre each which are plugged in series. So, when one is full, there’s an overflow that goes into the second tank and there’s another overflow that goes into the third tank.  And that’s about it. Then you wait for the rain to fill your tank.  It is important that you be careful of not using too much water. I don’t really drink the rainwater.  Sometimes, I make my coffee with it.  I never have had any problem. 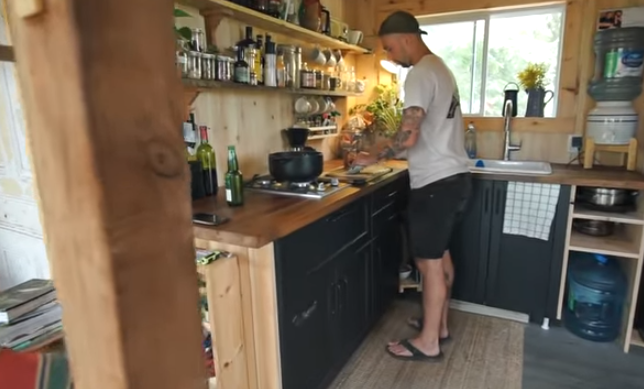 I can get my drinkable water from a spring. Basically, the rain goes into the gutter, which fills the first filter, a simple metal tray with holes in it. Then the first tank is placed on the second floor because during winter, you heat and then the heat goes up. And then you want your water to not freeze because sometimes you’re not there for a while, then you just make a fire, or you ask a neighbor to go by. It keeps the water warm. My other tanks are in a shed outside which are always full.  It really takes long to freeze l,000 litres.  But I have fans which are pushing air from the second floor to the shed and then there’s another fan that is pushing air into the cabin so there is air circulation.

I insulated this place with pink insulation.  It’s R20.  I put a layer of foam in the walls which I spray foamed all around, so maybe R32 in the walls and R36 in the ceiling. The floor is also pink insulation.  So, this place takes one hour to heat and then you’re good for a while with a simple fire. Winters here are nice because it’s cozy. But you need to enjoy snow shoeing and bringing your food with a backpack, but the trail is long.

Example the distance from your apartment to the subway to your work, it is basically the same, but you are in the forest and it’s nice. During winter for example, I wake up in the morning. I’m going to start my coffee on the stove and then I’ll go outside and shovel the solar panels so I can get electricity. So, it’s simple stuff like this that you must do, but it’s kind of fun. During summer, it’s different.  You wake up and you make your coffee because coffee is important. You try to not wake up very late because it’s hot. So, you go outside and water all the plants.

There’s always stuff to do. Why I decided to build a place instead of going to the bank and just asking for a mortgage. My father always complained about having a mortgage, all my life. So, if there was something that I really didn’t want it was a mortgage. With the job that I have, I am a freelancer.  I can take some time off and just build my own place. I didn’t have much spare time before because I was working all the time. I didn’t feel fulfilled with this.  As a result, I decided that I was going to build a house.

I wanted a more sustainable lifestyle as well. It’s sad what is happening right now. We’re not really like grounded with nature.  We think because we have the resources, it’s infinite. But we are basically heading into a wall, very fast. I wanted to have the experience that if something happens, we will know how to grow our own food. Also, you learn a lot about yourself while you’re building a place like this because you see how much electricity and water you use.

One thing I really like about living here is being surrounded by nature. It’s really cool to see the plants growing all around you and the trees. This lifestyle is what I really want to do for the rest of my life until I can’t walk the mountain anymore or if I find another place because I would really like a farm.

We use cookies to ensure that we give you the best experience on our website. If you continue to use this site we will assume that you are happy with it.Ok